Would you like to switch to the accessible version of this site?

Don't need the accessible version of this site?

On film as in life, addiction is not easily shaken 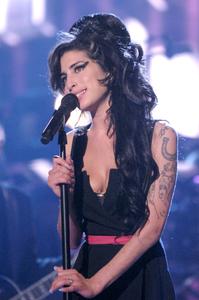 It’s the night of the 2008 Grammys, and suddenly massive star Amy Winehouse has been nominated for Record of the Year alongside established icons Beyonce, Foo Fighters, Rihanna, Jay Z and Justin Timberlake. Winehouse, a recovering drug addict who has been denied a U.S. visa and thus is unable to attend the ceremony, watches from a club in her native England as Tony Bennett, one of her idols, reads her name. “Rehab” has won. The stunned look on Winehouse’s face is priceless. Yet not long after, she’s backstage with her old friend Juliette Ashby, whom she tells, “Jules, this is so boring without drugs.”

It’s a scene from “Amy,” the documentary opening Friday that focuses on Winehouse, who died of alcohol poisoning in 2011 at age 27. But it could be taken from any number of big-screen presentations of addiction. They’re omnipresent. In fact, “Amy” is the fourth in four months, following “Desert Dancer” in April, the Chicago-made “Animals” in May and “Heaven Knows What” in June. In a couple of weeks, addiction also will play a part in “Southpaw,” starring Jake Gyllenhaal. The examples are so endless, actually, that no piece on Hollywood’s representation of the subject will include everything.

When recalling notable addiction stories, it’s hard not to think of Renton (Ewan McGregor) emerging from a toilet where he was searching for pills in “Trainspotting”; of Ben’s (Nicolas Cage) drinking becoming so compulsively routine that his life becomes an almost out-of-body experience in “Leaving Las Vegas”; of a former addict (Juliette Lewis) looking down on Jim (Leonardo DiCaprio), a former basketball star who looked down on her before he became an addict himself, in “The Basketball Diaries”; of Ray Charles (Jamie Foxx) struggling to prevent his career and personal life from succumbing to his heroin habit in “Ray”; of the almost indifferent viewing habits of porn- and sex-addicted Brandon (Michael Fassbender) in “Shame”; of Bob (Matt Dillon) pulling off a big score but already looking for more in “Drugstore Cowboy”; and, arguably most haunting, of a variety of addicts (Jared Leto, Jennifer Connelly, Marlon Wayans, Ellen Burstyn) pushed to lonely, degrading extremes in “Requiem for a Dream.” To name just a few.

It may seem like it’s all been done. David Dastmalchian (“The Dark Knight,” the upcoming “Ant-Man”), the Kansas City, Kan.-native star of “Animals” who wrote the film inspired by his five years of opiate addiction in the late ’90s/early ’00s while living in Chicago, wanted the film to be informed by the day-to-day detail of his experiences, not misleading cliches.

“There’s always a series of shots that you see that almost fetishize or glorify the cooking process—the spoon, the needle, the liquid, the firing of that,” he says. “There’s a kind of stylized approach to that that doesn’t really ring very true to me. It’s never a very glorious or beautiful experience. Even when I was very excited about the result of what was going to come from cooking, even early in my addiction when I’d be cooking up something, that in the moment to me was always fraught with an incredible degree of tension and stress. Because you can’t screw it up. And I feel like I saw that portrayed in times in my life in ways that were almost like out of a music video, which was a little bit frustrating.”

He adds that drug dealers are often presented as caricatures, which wasn’t what he observed while buying drugs in an area bordered by Washington Boulevard, Roosevelt Road and Western and Kedzie avenues.

“In my experience drug dealers are generally, especially when I was buying drugs on the West Side of Chicago, very smart, wonderful human beings who happened to have fallen into a particular life that I had,” he says. “In real life, [dealers are] just human beings that are living in a set of circumstances that that was their trade, and I was their customer.”

The movie’s sense of Jude (Dastmalchian) and Bobbie (Kim Shaw) wasting their opportunities is seen in countless addiction films, from the 1946 Best Picture winner “The Lost Weekend” (sample lines: "I’ve got to know that it’s around, that I can have it if I need it,” and “I’m not a drinker; I’m a drunk”) to both versions of “The Gambler,” in which a gambling addict (James Caan in the original, Mark Wahlberg in the remake) from a wealthy family seems intent on squandering the money and other advantages he has going for him. While these stories are often difficult to watch, it’s more important to be realistic than depressing, says Paul Booth, associate professor of media and cinema studies at DePaul. “Or maybe even authentic would be a better word. All movies, while they appear to [present] reality to us, they’re versions of reality. Or they’re someone’s vision of reality. And they’re [not] necessarily realistic despite the fact that we think they are,” says Booth, who would like to see more films about technology addiction. “Movies about addiction, if they don’t resonate with our experiences or our interpretation of what they should be or how they should be about it, will come across as inauthentic and therefore less meaningful.”

Indeed it does, according to Kellie Rice, a psychologist specializing in addiction at Working Sobriety Chicago, an intensive outpatient treatment center that works with people dealing with addictions and compulsive behaviors.

“There’s so many functioning addicts that are doing good enough to get by but really suffering in a lot of areas in their life, but they’re not curled up in the alley sweating or prostituting themselves,” she says, pointing to series such as “Shameless” and even “The Real Housewives of Beverly Hills” as examples of deeper examinations of the long process of battling addiction. (Via email, Rice defined addiction as “any kind of chemical dependency or compulsive behavior that you experience as unmanageable.”) She gives an example of something “boring and annoying,” like an uncle who throws a drunken fit every year at Christmas. “That’s not a fun story, but that’s actually more realistic,” she says. “It’s hard to portray that in a movie that’s an hour and a half long.”

It is. Some depictions, like the alcoholism in “Smashed” and sex addiction in “Thanks for Sharing,” feel vulnerable and credible about codependency, powerlessness and the difficulties of making a change.

Both Booth and Rice note that addiction sometimes fills a void but always numbs things, something seen throughout “Amy” as Winehouse, a longtime bulimic, copes with stress related to her family, her relationship with Blake Fielder-Civil and her career. But Dastmalchian, someone who’s been there and back personally, emphasizes the need for stories to show that recovery is possible with the right support system, no matter how frequently recovery fails.

It’s the opposite of Winehouse’s father alarmingly noting, “It’s Amy’s responsibility to get herself well,” more recalling a statement from Bennett toward the end of “Amy” that registers as far wiser than her father’s comment: “Life teaches you how to live it,” Bennett says. “If you can live long enough.”

Plus: David Dastmalchian on how addiction feels

“Imagine if someone put you in an iron lung or a sleeping bag that fits all the way over your head and there is no way that you can see out of it. You can’t see more than two feet around yourselves. And you and your needs and your physical and psychological needs that have been tricked by that chemical, by that addiction, are the center, the end and the beginning of your universe. And that is a psychological state of mind that is very difficult for people who [aren’t dealing with that] to comprehend. What it leads to is the utmost forms of selfishness in the true sense of the word, of self-destruction, whatever-it-takes-to-get-well mentality. And even the most well-raised, well-educated, well-adjusted, well-meaning people can fall prey to it. And by the way, it’s fucking hell. If ‘Dante’s Inferno’ had one level deeper, I think it would be being an addict in the depth of addiction … Here I am almost 13 years out of that life, I can sit here and go, ‘How the fuck did I ever think like that?’ But I did, and that’s all anybody needs to know whenever they’re thinking about the people that we’re trying to hopefully get to come back out of that life who are out there to this day.”

Some select quotes from addiction movies:

— “Any ache or pain or sadness or guilty feeling was completely flushed out.”; “The voice is always there in the back of your head: Just one more time, then we'll stop.” – “The Basketball Diaries”

— “Heroin addiction may explain your actions, but it does not excuse them.” – “Trainspotting”

— “You can never, ever ask me to stop drinking.” – “Leaving Las Vegas”

— “One drink’s too many, and a hundred’s not enough.” A bartender in “The Lost Weekend”

Want more? Discuss this article and others on RedEye's Facebook page.

Make a change today! Click here to request an appointment.

Click here to view and print forms for your appointment.